Preparations for the 2019 Malta Book Festival, taking place between Wednesday 6 and Sunday 10 November, are well underway!

A literary conference, relating to the genres of sci-fi and fantasy will be kicking off the festival on the evening of 6 November.  Participating guest authors will be Loranne Vella, author of the 2018 National Book Prize winner Rokit (Merlin Publishers), Malta-born Jon Courtenay Grimwood, Kali Wallace and Dave Rudden.

The programme for the MBF 2019, featuring book launches, presentations, poetry readings, meetings with authors, conferences and seminars, will be published in the second week of September.

This year, the Poetry International Festival Rotterdam turns 50! The milestone makes it the oldest festival in the city, and one of the oldest in the country, with a wealth of history and highlights. Nobel Prize-winning poets once stood on Poetry’s stages as bright young talents, and the festival is both a shining example for, and founding parent of, poetry festivals worldwide. Poetry International celebrates its golden anniversary with an extra festive edition at de Doelen, which also hosted the debut festival back in 1970.

Trailblazing poets will deliver transformative work thrumming with the now. Unique fusions of poetry by engaging artists from the worlds of music, cinema, and dance amplify the power, the beauty, and the personal impact of poetry, here in the form of an intimate reading or workshop, there as a multidisciplinary theatrical poetry spectacle. Right in the heart of the city, inviting, challenging, unmissable. 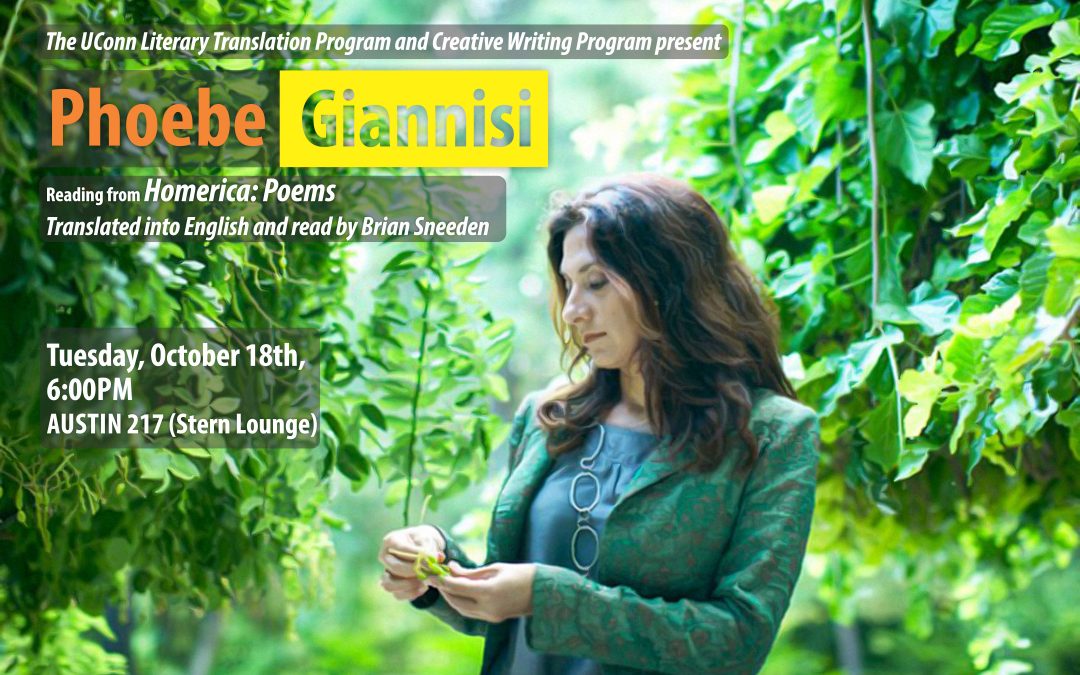 HOMERICA by Phoebe Giannisi – at UConn

Renowned Greek poet Phoebe Giannisi presents HOMERICA – dramatic performances of poetry in Greek and English, and will take place at 6PM in the Milton Stern Lounge, Room 217, in the Philip E. Austin Building.

New American Writing compares Giannisi’s work to C.P. Cavafy and Jean Rhys describing it as “completely original […] a complete rethinking of the myths. Perhaps it would be more accurate to call Giannisi’s re-tellings ‘re-weavings’ because they alter the fabric of the stories.”

A 2015-2016 Humanities Fellow at Columbia University, Giannisi is the author of five books of poetry, including Homerica (2009) which was recently translated into English by University of Connecticut PhD student, Brian Sneeden. She holds degrees from the University of Lyonn II- Lumière and the National Technical University of Athens, and is an associate professor at the University of Thessaly. She co-edits FRMK, a biannual journal of poetry, poetics, and visual arts.

Brian Sneeden, senior editor of New Poetry in Translation, describes translating Giannisi’s work as “a transformative experience. Phoebe Giannisi’s poems require a certain capacity for surrender – both in terms of how one experiences language and its perceived boundaries, but also in regards to the boundaries of English, which does not draw quite as easily as Greek from a vocabulary steeped in so ancient a history.”

On the Saturday prior to her appearance at Storrs, Phoebe Giannisi will be performing at the Antigone Now Festival hosted by the Onassis Cultural Center in New York City, where Brian is also reading his translations of her most recent poetry.