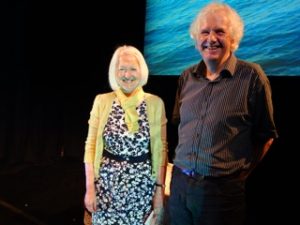 These events celebrated the launch of Trafika Europe’s quarterly journal – our first issue shares this theme of Europe’s northern islands – and it was quite an auspicious launch. This year’s Edinburgh festival was the largest literary and arts festival in the history of the world, and Summerhall is the top arts venue in the festival – indeed it is known as the largest private arts space in Europe. What’s more, Trafika Europe shared billing with Summerhall’s flagship production for this year’s festival. Artistic Director Rupert Thomson called Trafika Europe’s week of launch events “the highlight of our literary programme and an important part of our Festival as a whole.” It’s hard to imagine a better launch than this!

Europe’s northern islands have a timeless, enchanting atmosphere shrouded in mystery, expressed in beautiful poetry and stories. This was explored in the works performed, and audiences were also immersed in this ambience with projected audio and visual, giving a mood and continuity to these evenings not just as readings but as performances, complete with song.

We’re grateful to Summerhall for this memorable week, to their enormously dedicated staff and to our own great crew, headed by technical director Mark Boston, for all their hard work preparing and pulling off these events. Thanks are also due to NORLA (Norwegian Literature Abroad), the Icelandic Literature Center, and the Gaelic Books Council for their kind offers of support for these events.