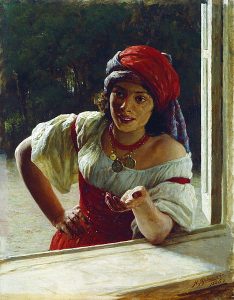 Romani Literature, Identity… and You was a charity benefit for the European Roma Rights Centre (ERRC), the world’s top organisation for Roma human rights advocacy. This three-hour gala was also designed to foster appreciation of new Romani writing, foreground social issues and raise regard of Roma contributions in the wider European community.

These three talents also participated in our roundtable discussion, which drew from the literature itself to examine issues of identity and some underlying conditions of Roma communities in Europe. They were joined by three expert panellists:

The evening was hosted by Trafika Europe’s Director Andrew Singer, who also read out from Roma poetry and fiction in translation throughout the evening:

The evening was rounded out with a short film by poet and painter amigó (János Bogdán).

Guests were also treated to a fantastic musical set featuring the uplifting world roots reggae songs of Brina. Accompanying Brina on guitar was Kieran Murray, who doubled as audio engineer for the evening. Kieran has assisted engineering on Grammy-award winning albums by both Santana and Ricky Martin.

The venue for this event, Conway Hall, is a landmark of ethical, intellectual and cultural life in central London.

Special thanks is due to all who helped make this event such an enjoyable and enlightening glimpse into a remarkable body of literature and concerns. Roma (and related groups) constitute Europe’s largest minority, and the plight of the Roma remains the greatest human rights challenge on the continent.

Since 1996, the ERRC has helped Roma communities combat discrimination and seek equal access to justice, education, housing, health care and public services, and has won numerous awards for its work advancing human rights for Roma.

A DVD will be made from this event with additional educational material, as a tool for Roma human rights advocacy and outreach to policy-makers.