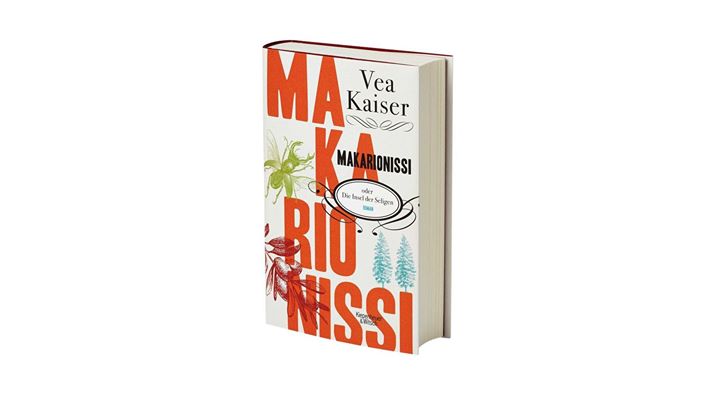 Deutsches Haus at NYU presents a reading by the author and current writer-in-residence at Deutsches Haus at NYU, Vea Kaiser, from her recent novel Makarionissi oder Die Insel der Seligen, followed by a conversation with the acclaimed Germanist, writer and mastermind of @neinquarterly, Eric Jarosinski.

When Yiayia Maria misreads the signs in a little village nestled in the Greek mountains, she ends up bringing misfortune to more than one generation of her family. Her grandson discovers the eroticism of the German language in a small town in Lower Saxony. His cousin, who is feared by her political opponents as a modern Antigone, gives birth to a girl with a caul on a stormy night. Meanwhile, an Austrian province becomes the scene of a fierce battle for hegemony, and exotic cooking with ants and locusts in a Swiss metropolis is used as a means to soothe a longing for far-away places. And finally, on an island shaped like a stag beetle, an unemployed trade unionist embarks on a desperate search for his wedding ring, while an eccentric musician finds the woman he had lost 40 years ago.
Panelists:

Vea Kaiser, born 1988 in St. Pölten, Austria, published her first novel Blasmusikpop oder Wie die Wissenschaft in die Berge kam in 2012. It was ranked #1 in the ORF bestseller list and was awarded the prize for “Best Debut Novel” at the 2013 international Festival du Premier Roman in France. Her first play Die Argonauten premiered 2014 at the Viennese Rabenhoftheater. She was also writer-in-residence at the Bowling Green State University and was voted “Author of the Year” by Austrian readers. Her second novel Makarionissi oder die Insel der Seligen, published 2015, accelerated into various bestseller lists. Whenever she is not on book-signing tour through Europe, Vea Kaiser studies ancient Greek in Vienna and writes about her Fabelhafte Welt (Fabulous World) filled with deaf dogs, adventurous recipes, the ancient world, soccer, high heels, sailing, cooking, fortune-telling, a big loud wild family, and the magic of literature in the magazine Kurier.

Once a professor of German language and literature, Eric Jarosinski has gone on to find his true calling as a former professor of German language and literature. He is currently the editor and sole author of @NeinQuarterly, the world’s leading fictitious journal of utopian negation (found on Twitter), and a columnist for the German weekly Die Zeit. In addition, Jarosinski regularly takes his stand-up philosophy/sit-down comedy on the road as part of his ongoing Failed Intellectual Goodwill Tour. His writing and stage performances have been featured in numerous international publications, including the New Yorker, The Economist, Frankfurter Allgemeine Zeitung, and El País. Jarosinski’s first book, Nein. A Manifesto., was recently published in six languages.

Events at Deutsches Haus are free and open to the public. If you would like to attend this event, please send an email to [email protected]. As space at Deutsches Haus is limited, please arrive ten minutes prior to the event to ensure you get a good seat. Thank you!

“Makarionissi oder Die Insel der Seligen: An Evening with Vea Kaiser and Eric Jarosinski” is presented with the generous support of the Federal Chancellery of Austria.

Excerpt (Summary description)
When Yiayia Maria misreads the signs in a little village nestled in the Greek mountains, she ends up bringing misfortune to more than one generation of her family.