Trafika Europe hosted an Evening of Slovenian Literature at Bowery Poetry Club in NYC, Sunday 08 November 2015. Celebrating the launch of Trafika Europe 5 – Slovenian Interlude, three writers from this issue performed from their work. Visiting Slovenian poets Aleš Šteger and Tone Škrjanec were joined on stage by Tess Lewis, reading from her new translations of Maja Haderlap, the “lyrical voice of Slovenian Austrians”. 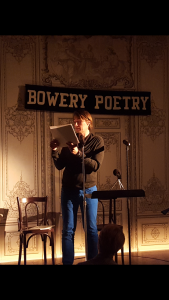 Aleš Šteger is the most translated poet in today’s Slovenia; his poetry, prose and essays have been translated into 16 languages, appeared in hundreds of periodicals including the Times Literary Supplement and The New Yorker, and garnered numerous prizes. You can read about him here. 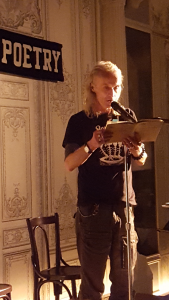 Tone Škrjanec has been the organizer of Slovenia’s major annual poetry festival. In addition to his exciting poetry, he also translates poems and novels from English, Croatian and Serbian. He’s been reviewed glowingly e.g. by John Taylor in Arts Fuse.

Tess Lewis is former Board member of the National Book Critics Circle; Advisory Editor for The Hudson Review, and has recently served as curator of the Festival Neue Literature (the premiere annual festival of German literature in NYC). She’s received much recognition and support for her translations, including a Guggenheim Foundation award, Max Geilinger Translation Award, National Endowment of the Arts Translation Fellowship, PEN USA award, and English PEN award. 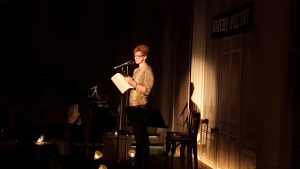 At our event, she read from Maja Haderlap’s Angel of Oblivion, a novel about the Slovenian minority trapped in Austria during WWII (forthcoming from Archipelago Books). This beautifully lyrical work in translation won the Austrian Cultural Forum Translation Prize for 2015, and enjoys its English-language debut in Trafika Europe. She also read from Maja Haderlap’s poetry. 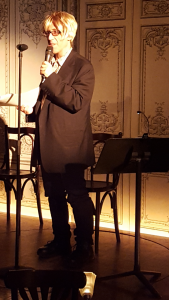 You can check out all these writers and much more in Trafika Europe 5 – Slovenian Interlude, free online. A great interview we had with Tess Lewis about translation from French and German can be heard here  (46 minutes).

Our Slovenian evening was introduced by Trafika Europe director Andrew Singer, and ably assisted by intern Clayton McKee, who took the photos for this article. Many thanks to the venerable Bowery Poetry Club, and to all who attended and made this evening such a memorable event.