About Trafika Europe – a fresh approach to European literature

Trafika Europe is your online literary site for great new writing from across Europe in English translation, with our online quarterly digest. . . and Trafika Europe Radio – Europe’s first “literary” radio station – free online. We want to maintain a literate, creative space where writers, publishers, translators and readers can meet, share their work and interact, free of borders in the shared medium of English language.

Trafika Europe seeks to help renew the role of literature in nudging along the European conversation in culture, introduce new voices, foster collaborations and create a kind of “community of communities”. In cultivating an attractive space for it, we hope that a vision of greater cooperation, mutual regard and community across the 47 countries of Council of Europe will continue to grow of its own accord – via a shared appreciation of European literature in all its many forms and communities.

Trafika Europe follows a previous project, Trafika – a print quarterly of new fiction and poetry from around the world in fresh English translation. That earlier organization, Trafika, placed special emphasis on introducing the work of writers who were unknown or little-known to an English-language readership.

We enjoyed grants/donations from The Nation Institute, The Calouste-Gulbenkian Foundation, National Endowment for the Arts, Council for Literary Magazines and Presses, Central and East European Book Publishing Project, Open Society Fund-Prague, and the Czech Ministry of Culture.

Our advertisers included Farrar Straus & Giroux, Harcourt Brace, Grand Street, The Nation, and Twisted Spoon Press. We also cross-advertised in other literary magazines, and achieved a special consultative status with The Paris Review.

If magazines still exist 20 years from now… the literary ones are likely to resemble an attractive new quarterly… called Trafika.
The Washington Post

representative of the directions life will take as the world continues to come together: an inclusive one… comparisons neglect the originality… the literature of tomorrow today.
The LA Reader

features some heavy hitters… but more committed to publishing emerging writers… translated into English for the first time.
The International Herald-Tribune

reverse[s] the general flow of contemporary culture… Trafika proceeds with a humility rare in the New World Order.
The San Francisco Bay Guardian

the writing comes from unexpected sources
The New Yorker

a model for magazines of the future, bringing together writers… to see what we have in common as well as to celebrate our differences
Laughing Bear Newsletter

worthy of the heritage of their Parisian forebears
Checkpoint/Berlin

Trafika[‘s] contributors receive their inspiration from exotic locations and use their art to make those addresses open to the world.
Bloomsbury Review

surprisingly fresh… enables us to become super-sensitized to the plurality of methods being pursued by artists the whole world over… Check it out!
The Net

Other publications and sources which have featured Trafika include:

Trafika received the honor of a PEN Translation event in its name in New York in recognition of its overall achievement.

Now Trafika Europe has put a European frame around all this, to explore issues of identity and community in a larger shared Europe – by curating this shared space for European literature online. 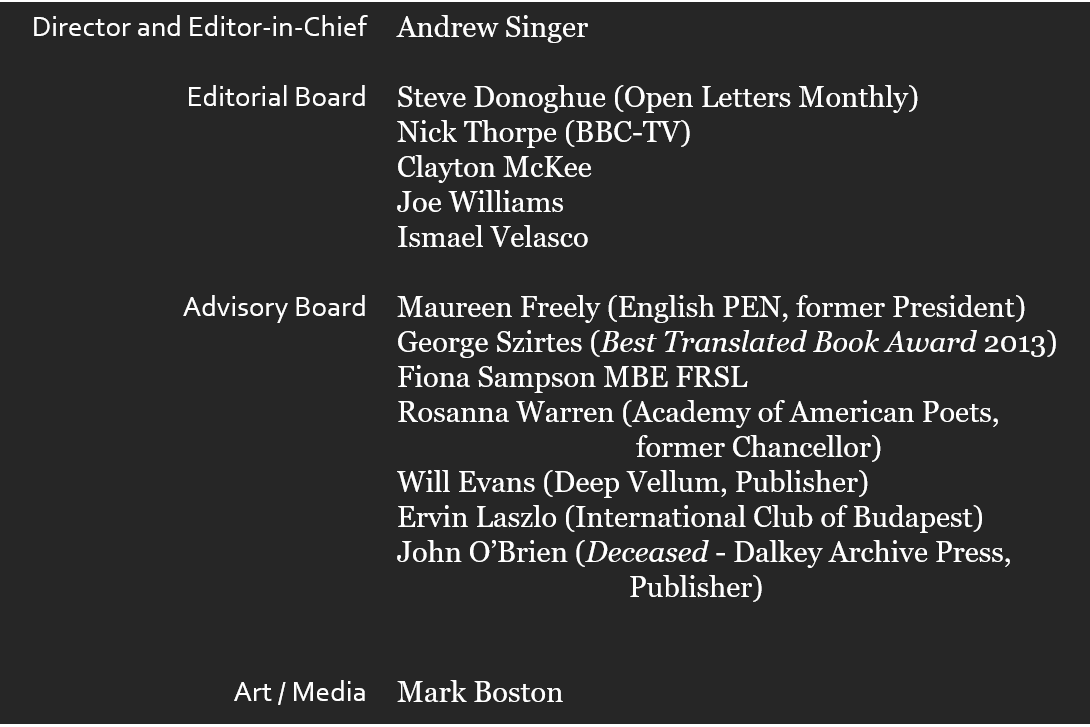 Trafika Europe:  many voices, one continent